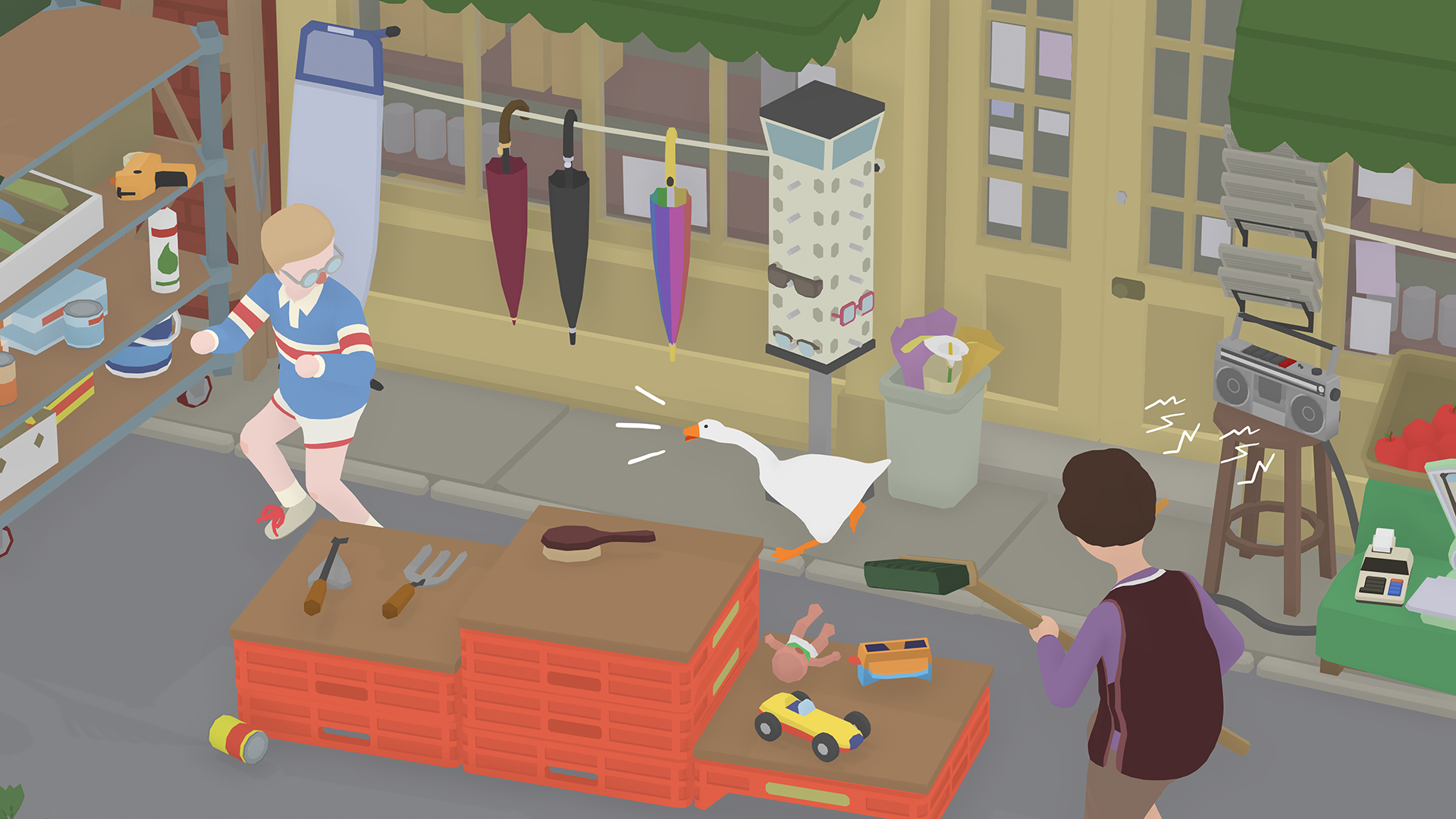 Untitled Goose Game (PS4) – have a gander at this (pic: Panic)

Already one of the best indie games of the year, the infamous Untitled Goose Game arrives to wreck its havoc on PS4 and Xbox One.

Sephiroth, Ganon, M. Bison, Albert Wesker… video games have their fair share of villains you love to hate – and sometimes love to play as – but none compares to the Goose with No Name. There’s no sympathetic backstory or conscience to be wrestled with in Untitled Goose Game, as you take control of a creature whose campaign of terror knows no mercy or limit. And it is glorious.

Having been released earlier in the year on Switch and PC, Untitled Goose Game has taken only a thankfully short period of time to arrive on the other consoles – boosted by what we would describe as the game’s unexpected success, if it hadn’t looked amazing from the very first trailer.

Your goal in Untitled Goose Game is simple: to annoy everyone. Set in a sleepy English village in the 80s, as you enter each new area you’re given a task list that includes trapping an innocent boy in a phone box, causing someone else to break a fancy vase, and making an old man fall over. There’s no reason to do any of these things, it’s just for the pure malicious fun of it. Which wouldn’t have worked nearly as well if you weren’t playing as a goose.

In gameplay terms Untitled Goose Game is surprisingly similar to the Hitman series, in that there’s a lot of stealth elements and the chances of success are greatly increased the more forward planning you do. From hiding in hedgerows to patiently watching the movement patterns of foolish humans, there are some very solid gameplay mechanics at the heart of the game.

Not only that but the way you solve the various problems is impressively open-ended, helped by a relatively realistic physics engine that is reliable enough that you can set up some quite complex traps (the goose’s beak proves remarkably dextrous at picking up and manipulating objects).

Cats stars urge you to give movie a chance, despite that terrifying trailer

Even something as simple as stealing someone’s keys can be achieved numerous different ways, many of which we suspect the developer (Australian studio House House) never anticipated.

Untitled Goose Game isn’t perfect though, as it’s rather short and some of the objectives do get a bit samey before the end. But it’s appropriately priced and so full of charm and energy you could forgive it, and the goose, for anything. Well, we could. The villagers seem a lot more upset about it all, but then that’s the point.

In Short: A celebration of misbehaviour, with an avian avatar that instantly takes its place amongst the greatest villains in video games history.

Cons: The game does start to run out of new ideas towards the end, with some samey objectives -despite being quite short.